Daniel Garcia, official chef of the red, he cooked with us. 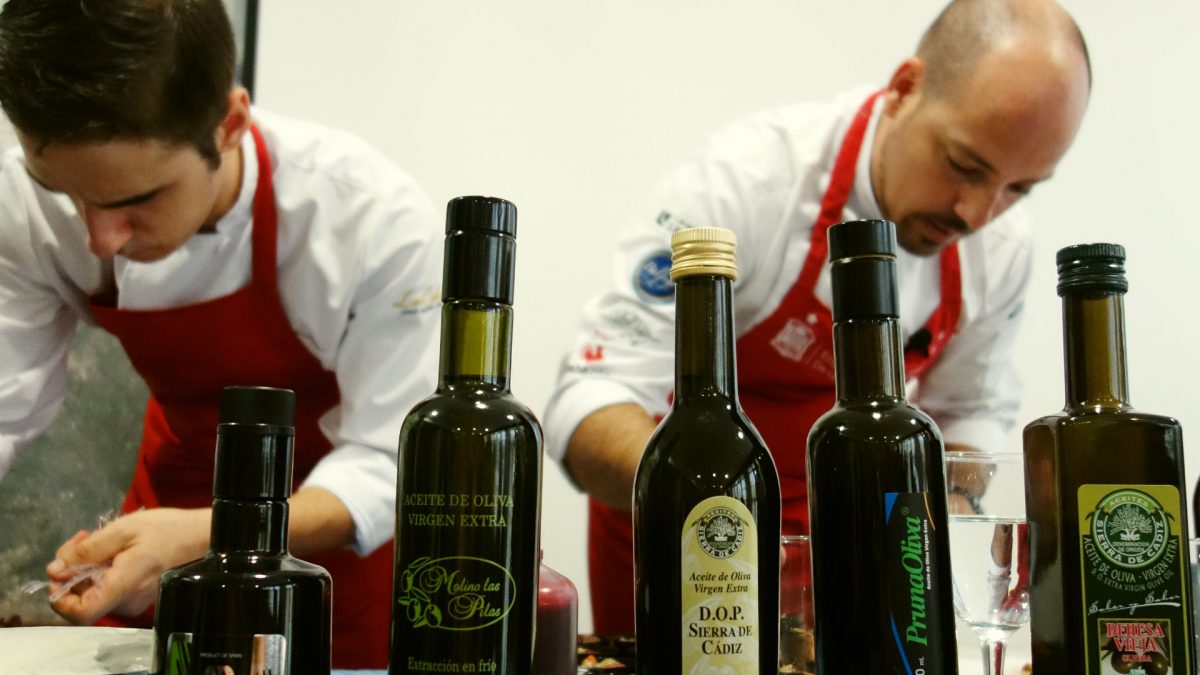 His name is Daniel Garcia Peinado, is he Official chef of the Spanish Soccer Team and captain of the Spanish Professional Cuisine Selection. Also, is he executive chef in the hotel's restaurant La Cala Resort from Mijas, In Malaga. In love and faithful defender of Extra Virgin Olive Oil, it is known as "The Chef of EVOO" and this friday 14 September has been in the Cadiz town of Olvera, where he has starred in a showcooking in which the fundamental ingredient was Extra Virgin Olive Oil from the Sierra de Cádiz.

Daniel Garcia Peinado, the chef of the national team, with Jesús Arjona, from the La Cala de Mijas hotel.

The activity was framed in the I Conference on Olive Oil and Health organized by the Regulatory Council of the Protected Designation of Origin of Aceites de la Sierra de Cádiz which had the presence of experts in the field who praised the healthy properties Extra Virgin Olive Oil, usually, and from Oil from the Sierra de Cádiz in particular.

The conference was well received by the public who wanted to hear from the experts.

So, the doctor Francisco Lorenzo Tapia, expert in community nutrition, highlighted the important role that olive oil has played in the Mediterranean diet throughout history. Help to reduce, up to a 40%, the risk of heart attacks and other cardiovascular accidents. It is also a great ally in reducing breast cancer, is beneficial for reduce diabetes, rheumatism or prevent osteoporosis. These affirmations come endorsed by different studies that have been carried out in several Spanish universities, like Barcelona or Malaga, on the beneficial effects for health of the consumption of Olive Oil integrated into a Mediterranean diet.

Mango gazpacho made with EVOO from the Sierra de Cádiz PDO, a fresh and fun dish.

For his part, the professor of the Department of Analytical Chemistry of the University of Córdoba, Feliciano priego, noted that the characteristics of the oil from the Sierra de Cádiz, as it is a oil made with various types of olives (multivarietal) and be a mountain olive grove, is one of those that meets the conditions to have "very high levels of phenolic compounds that are what determine the healthy properties of Extra Virgin Olive Oil”, an aspect that is currently being investigated within the framework of Aristoil project.

Once the knowledge and theory about the benefits of Extra Virgin Olive Oil had been provided, it was time to put them into practice by the hand of Daniel Garcia Peinado than, with his partner and also chef at La Cala Resort in Mijas, Jesus Arjona, prepared a menu consisting of three dishes with olive oil from the Sierra de Cádiz.

Each of the three dishes was made with the most suitable oil chosen by the chef.

The goal was none other than promote consumption of Extra Virgin Olive Oil from the Sierra de Cádiz without limiting its use to dress salads, but “The oil can be used in almost the 90% from the Spanish cookbook”Even more so considering the premium quality of which the Oil of the Sierra de Cádiz can boast.

Daniel and Jesús in full preparation of the dishes with EVOO Sierra de Cádiz.

The first dish, refreshing and great fun, was a Mango gazpacho accompanied by a red tuna tartare from almadraba, trout roe and spicy sprouts.

Daniel made the mango gazpacho with oil from the Sierra de Cádiz PDO.

Daniel started soaking the gazpacho bread in Olive Oil from the PDO Sierra de Cádiz and later used it to garnish the red tuna tartare.

The second consisted of a risotto with boletus, truffle and parmesan, with Iberian feather marked with Hoisin sauce and topped with Extra Virgin Olive Oil as a substitute for butter, so the plate is much healthier. In this case, the chef of the Spanish National Team, used the oil of hojiblanca from the Prunaoliva cooperative, included within the Sierra de Cádiz PDO.

Boletus and truffle risotto with Iberian feather, topped with olive oil instead of butter.

For dessert, Daniel drew up a EVOO yogurt where the taste of yogurt, in this case Greek type, changes completely when mixed with Extra Virgin Olive Oil.

On this occasion Daniel presented two desserts made with different oils, one of the variety Arbequina from the cooperative Nuestra Señora de Los Remedios de Olvera and, the other, a Oro Natura organic multivarietal oil from the PDO Sierra de Cádiz, with which the result was that each yogurt had a totally different flavor depending on the oil Da

Denomination of Origin Sierra de Cádiz uses its own and third-party cookies to personalize content and advertisements., offer social media features and analyze traffic. Also, we share information about your use of the website with our social media partners, advertising and web analytics, who can combine it with other information that you have provided or that they have collected from the use you have made of their services. You can get more information by consulting our Cookies policy.

This website uses cookies so that we can offer you the best possible user experience. Cookie information is stored in your browser and performs functions such as recognizing you when you return to our website or helping our team to understand which sections of the website you find most interesting and useful.. see more

You have free shipping on all your orders!
M